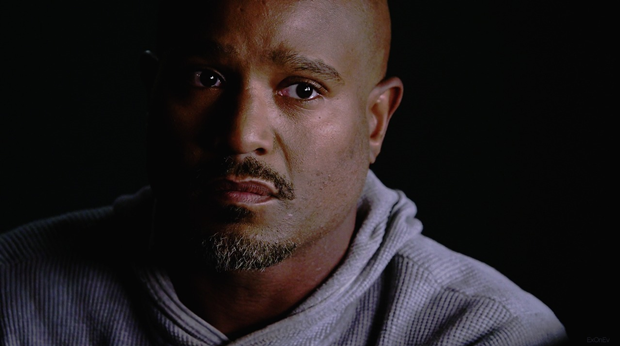 Well, to be fair, you do have rotting skeletons at various stages of decomposition in your back yard, and since your neighborhood wasn’t built on an Indian burial ground? Kinda suspicious.

This was an odd episode. Shot very dark (with the exception of when the team was outside in the daylight), with everyone dressed in black, even Penelope, with no explanation for it just set a weird tone. The little gossipy hint between JJ and Cruz at the beginning was exposition-heavy and obvious; this was a conversation they would’ve had long before now, and probably on the phone, not at the office where someone could overhear, like Garcia nearly does.

Racism is always an excellent focus for deep, true life drama, and a black man’s rage is a topic worth delving into, but what was with that ridiculous Rossi reveal? Stuffing the kid into a locker isn’t that unusual an occurrence, but to add the pee factor was just gross. It wasn’t necessary, and I really had trouble believing it actually happened at all. Also now Rossi was bullied in high school too, just like Reid was? Unoriginal. And how will it affect Morgan and Rossi’s dynamic? Is Morgan always going to look askance at Rossi now? All the rapport they’ve built over the years down the drain? I don’t buy it.

When exactly did the BAU become shouty bullies? JJ looked ridiculous trying to browbeat the suspect, and Hotch was stymied by the son’s blatant “yessuh, massa” act that went on far too long. The son was wimpy, the wife was dumb and clueless, and the dad was just a murdering psychopath (although I need to give props to the actors – they owned their parts and were all excellent). Exploring his motivation didn’t excuse his crimes or make him sympathetic in my eyes, and I’m sorry but those KKK assholes would not have just castrated him, they would’ve killed him. The son’s parentage was confusing to me – so who actually fathered him?

Morgan got short shrift in this episode, a big mistake. This was a great opportunity to show yet again just how heroic and complex our ‘sculpted chocolate god’ really is, especially in comparison to this guy. How he’s faced incredible adversity of his own, but instead of turning to brutalizing innocents, he made a choice in his life to rise above it, to help instead of harm. Too bad he was written so one-note here.

So were Blake and Reid! They were nearly useless, spouting info that could have easily been relayed by the local law enforcement. I was very dissatisfied with the team interaction this episode, even though their profiling was pretty solid. I don’t like it when everyone is written interchangeably, and they were definitely that.

So Rossi’s a racist, JJ’s a liar and a sneak, Hotch is a bully and the rest just flounder. Not my heroes, not my team, and definitely NOT my favorite episode.

One thought on “Criminal Minds Review for Episode 9×09, “Strange Fruit””