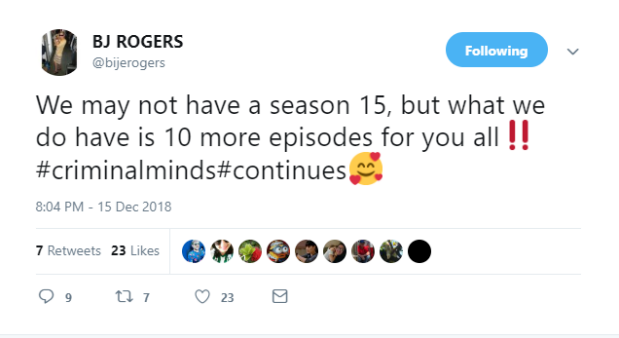 Announced last night via BJ Rogers’ (wardrobe department head) twitter and other social media, our show will definitely be getting more episodes – but did her statement raise more questions than it answered?

Contrarily, fan outlets like SpoilerTV had previously reported just last week that there were no additional episodes on tap for the veteran yet still wildly popular crime drama this season, fueling speculation that this year might be the last. Yet the announcement last night was made with no further follow-up, leaving fans to jump to conclusions of their own.

Questions like “Will the episodes air this season?”, “Have any been filmed yet?”, “Does this mean there’s definitely no season 15?”, and other speculation ran rampant, and is still being debated as of this writing. It makes sense that either the studio wants CM to go out with a BANG, or is showing an early vote of confidence for an additional season.

The fact that most of the actor’s contracts are up this season is also a factor to consider, as well, and if there is a much-hoped-for continuation, when will the viewers find out the details? Much remains up in the air at this moment, but one thing is certain – the fans are here for MORE Criminal Minds, no matter how it’s doled out.

Watch this space for further details, as it looks like it’s Wheels UP for the foreseeable future!