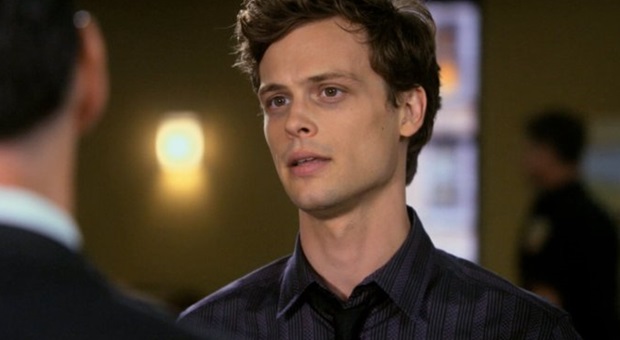 What Does The Gube Say? NEW MGG Interview!

Criminal Minds’ resident genius spoke with the Las Vegas Review-Journal and gave some insight as to what he’d like to see for Spencer Reid in season ten, premiering less than a week from now, Wednesday, 10/01/14 on CBS.

“It definitely haunts me, unfortunately…”

He’d been shot before.

A couple of times, actually.

Dr. Spencer Reid had stared down death numerous times over the years. But something about the way he took a bullet in the neck in May from an Uzi-wielding, pimping preacher — or maybe it was an Uzi-wielding, preaching pimp — had many viewers convinced that the mussy-haired fan favorite was a goner.

Yet Las Vegas native Matthew Gray Gubler, who’s kicking off his 10th season of playing Reid on “Criminal Minds” (9 p.m. Wednesday, KLAS-TV, Channel 8), was oblivious to the panic that was setting in across social media and fan sites.

“You know, I wasn’t aware of it,” he admits. “I’m kind of, like, not so technologically savvy. So unless people say it to me in real life, I don’t really hear anything at all.”

Gubler, 34, says he talks to his parents — attorney John Gubler and former Nevada GOP chairwoman Marilyn Gubler — “almost every day,” so they knew he wasn’t about to be unemployed.

He also was spared the hassle of having to reassure concerned friends, because, he says, “I don’t think a lot of my friends even know I’m on the show, to be honest.”

Never much of a buzzy, water-cooler sensation, “Criminal Minds” still managed to finish the 2013-14 season as TV’s 12th most-watched show, an incredible feat for an aging series without the letters “NCIS” in its name. And, given the drama’s frequent round-the-clock airings on cable’s A&E and ION, most of America must have stumbled across Reid and the rest of the FBI’s Behavioral Analysis Unit at some point.

After nine seasons, Gubler has portrayed the socially awkward genius longer than Michael J. Fox was Alex P. Keaton. Longer than Tom Selleck was Magnum. And, as he’s quick to note, “longer than Alf was Alf.”

“Criminal Minds” has been on the air for so many years, fans have literally grown up with Gubler’s Reid.

“I meet kids that are 20 that have been watching it for 10 years,” he says. “I see there’s a unique and really lovely opportunity to kind of help enrich people’s lives, hopefully, by being a friend that they have on TV or someone they can kind of look up to and aspire to be like. I hope that he continues to be a hero to people.”

Second, whoever was letting their 10-year-old watch “Criminal Minds” needs to be put in jail.

While it can’t hold a bloody candle to some of the shockingly grim fare on cable, the CBS drama is easily one of the more disturbing series in the history of network TV.

“It definitely haunts me, unfortunately,” Gubler says of the accumulation of darkness he encounters each day at work.

“I’d like Reid to actually get a girlfriend that isn’t killed in the show,” he adds. “I think the most subversive thing the writers can do at this point is let Reid be happy instead of perpetually keeping him in a state of frenzy and sadness. … I’d love for lovely things to happen to Reid.”

Having filmed seven episodes of season 10, Gubler reports that Reid has fully recovered from the trauma of that two-part May finale that also found the recuperating FBI profiler at the mercy of a homicidal sheriff’s deputy who was posing as a nurse.

“He’s hanging in there. He’s doing great, actually,” Gubler says of his alter ego. “He misses Alex Blake (Jeanne Tripplehorn, whose last episode was the May finale), but he has a new friend in Kate Callahan,” played by “Criminal Minds” newcomer Jennifer Love Hewitt.

Although he majored in acting at the Las Vegas Academy, Gubler’s passion has always been filmmaking. In January, he’ll direct another episode, something he’s done at least once each year since season five.

It’s too early to know what the episode will be about, but Gubler has a pretty good idea of how it will feel.

“Our writers room is fantastic and so encouraging. And they know that I like the more whimsical and strange things. When the writers know that they’re working with me, I feel like I hopefully inspire them to create something a little left of center.”

While the demands of “Criminal Minds” keep him in Los Angeles for much of the year, Gubler still comes home to the valley as often as he can. “I’m lucky to be from the best city in the universe,” he gushes. “I feel like it’s one of my dearest friends.”

Having just been here earlier this month for the grand opening of “Kinky Boots” at The Smith Center for the Performing Arts, would he ever consider a return engagement? Maybe something along the lines of “An Evening with Matthew Gray Gubler”?

“I would love that! Yes! I would love that more than anything,” he declares. “Hopefully one day in the future when I have a little more time. … I did that once in New Hampshire, and it was one of the more fun things of my professional career. It was just sort of storytelling to a group of captive people in a room. So I hope I can lock a lot of people in The Smith Center and regale them with funny stories.”

Until then, he’s grateful to be able to stay busy protecting the TV world from all those assorted weirdos, creeps psychopaths, not to mention those elusive killing teams/families.

“I’m in a very fortunate position to be able to say that I’ve gotten to play a character for this long. It’s been such a fun adventure.”

One thought on “What Does The Gube Say? NEW MGG Interview!”