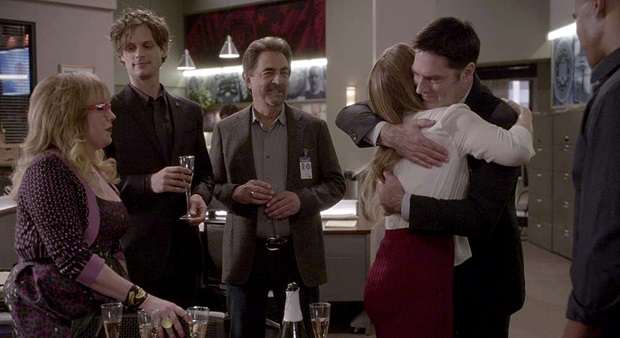 Holy Schnikes – what an intense episode! Right from the start we’re whisked into the thick of it. We don’t know the UnSub yet (yay, thanks Jim!) but here’s 1) Morgan in prison to get some intel out of Montolo (the scarfaced assassin dude from the premiere), 2) there’s an urgent situation that Rossi’s daughter Joy has uncovered, and 3) HERE’S JJ!

She comes off the elevator and we see she’s excited, but not nearly as excited as her number one fan Spencer, who scoops her up and breathes “Welcome back… welcome back” into her ear before gently setting her down. It’s an emotional moment, not only for Jencer shippers (raises hand), but because Reid is acting as proxy for us the audience. We missed you too, girl.

Rossi hands her a box of what we know are very expensive cigars (did we know Will smokes cigars?), and Spencer gestures grandly at his entire encyclopaedia collection that he’s handing down to his newest godson. Because of course you’re never too young to begin old fashioned research habits. Garcia grabs JJ’s hand and leads her to her desk where there’s tons of adorable pictures of little Phoenix as Michael covering her desk. It’s an appropriately wonderful welcome home and I could just watch that scene over and over. 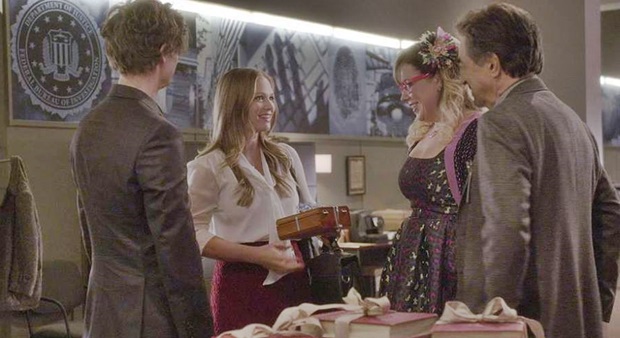 Enter a big, complicated (double UnSubs that have nothing to do with each other!) plot, a kidnapped co-ed, and you have the recipe for some of the finest storytelling Criminal Minds has to offer. Rossi’s daughter Joy (played by Amber Stevens-West) was a standout in an episode filled with great acting. Her warmth and ease with her dad is genuinely played, and the scene where Rossi told her he “wouldn’t lecture, just listen” when she revealed she’d been attacked tugged at my heart in the best of ways. Same with his reaction when she used his last name for what we imagine is the first time. The look on his face was pure… well, joy. Moments like these are what make the show for me. 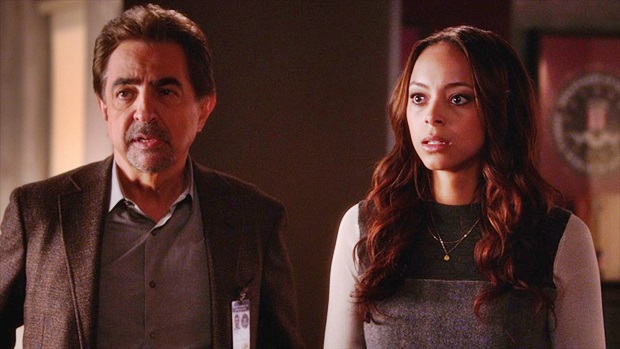 The young victim did a great job too, her terror was convincing and her reactions appropriate. I liked how she continued to fight back with the pepper in the soda, and in trying to physically struggle with the UnSub.

The scene with Reid and JJ in the alley was a little anvillicious in explaining how Spencer will be gone for two, maybe three episodes (Diana’s taken a turn for the worse). It needed explaining though, and I’m glad they did it. JJ was so warm with him, and this exchange was beyond lovely: 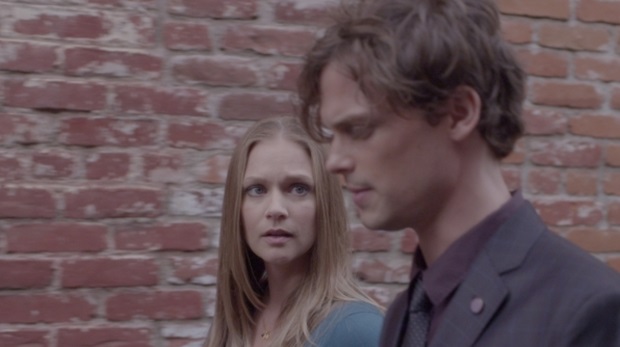 JJ: What? Spence, why didn’t you tell me?

Reid: I didn’t want to bother you.

JJ: Stops and grabs his arm, looking into his face. Hey, that’s never possible – got it?

Yeah JJ, we got it. Now when is Will gonna fall off that cliff? *wink*

The reveal at the end where Penelope’s bots are The Dirty Dozen was a surprise twist that I didn’t see coming. Sometimes after 10 seasons, we feel as though we know this team, and the writer’s strategies so well that surprises are nearly impossible, so thanks for that, show – now I’ll worry about her until she’s safe! This season has the fandom guessing as to who will stay or go, who will die or live to profile another day. 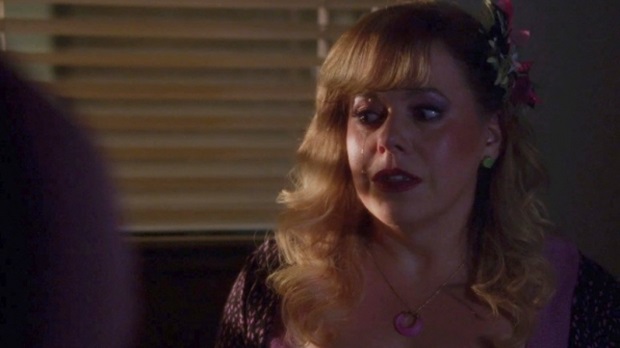 This episode is a prime example of what Criminal Minds can and does do when it’s firing on all cylinders. Favorite things:

The 2nd UnSub Tom Larsen’s story was desperate and sad. What an assclown his father was! I found myself invested as much in his motivation as I was with the BAU scenes (rare for me, I’m all about our heroes). A fine testament to the skilled pen of Jim Clemente, and to Glenn Kershaw’s well-established directing prowess.

What were your favorite moments in Target Rich? Let us know in the comments below!