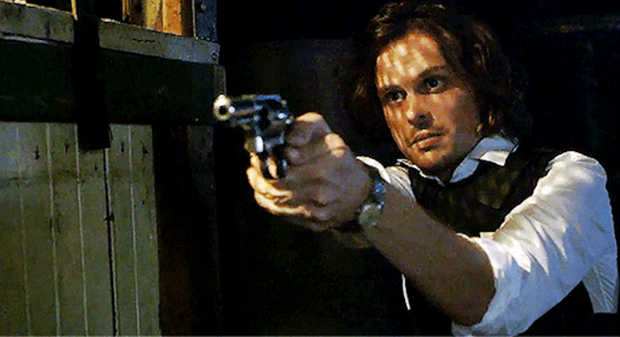 Lucky thirteen. Here we go. The first episode of the 13th season of Criminal Minds. It’s been a long journey, and we’re not even close to being out of gas. If this emotional thrill ride of a season opener is any indication of what we’re in for the rest of the year, then buckle up my friends.

We start right where last season left off, with the crashed SUVs askew in the road and Penelope rightly panicking because she can’t get hold of anyone on the team. She calls in Matt Simmons, her friend from the IRT, and off they go to the crash site. Penelope gives some bureaucrat a piece of her mind on the way there, and gets medical on the scene as soon as she witnesses the carnage. 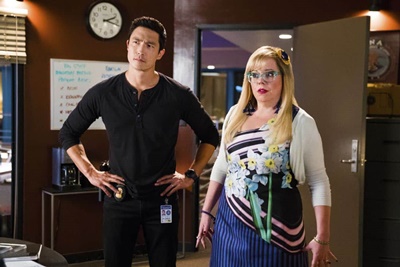 We see that our team’s injured to varying degrees, and they’re mostly pretty banged up. Rossi has a hurt leg, but does a head count and is the first to notice Emily’s not there. Tara’s in shock so she isn’t really making much sense, and JJ has glass in her head and with blood streaming into her eyes she can’t see. Luke seems to have escaped mostly uninjured, so he and Matt help the others, and Penelope… well she goes to Stephen Walker in the back seat of the SUV, and we see that he didn’t survive. Although we knew this would be the case due to Damon Gupton’s departure, it’s sad to see it played out. Garcia stays with him, until they come to take him back to the hospital with the others, as is procedure.

This was the first time an actual member of the team proper has been written out by the character’s death, and it was handled tenderly, and with respect. Tracie Thoms as Stephen’s bereaved wife Monica completely destroyed me in both scenes she was in – at the hospital to see Stephen one last time, and at his funeral towards the end of the episode.

Reid. Our beloved doctor was twitchy as all get-out, due to his ordeal that *just* ended, and to make matters worse, his team has just been blitz-attacked by Scratch, resulting in one death and a trip to the hospital for the rest. He gets to JJ first, of course, and she’s disoriented, but Spencer has helpfully called Will already and so she’s mollified. Luke comes in and says Rossi needs them, so they go get a cryptic message from Rossi, who calls them assclowns and it’s hilarious. Rossi is amazing in this episode. His snark knows no bounds, and he plies it skillfully because they have no time to waste and he doesn’t want his team paralyzed.

JJ ends up sitting with Rossi while he catches some shuteye, and Will comes in. Y’all know I’m a Jencer shipper, but I really liked this sweet scene between JJ and Will. He reiterates his devotion in his low-key way, and together they make the the right decision to keep their lives as is.

Reid doesn’t feel he’s ready to be back on the team, but Rossi’s calling the shots now and reinstates him on the spot. Later, back at the BAU Spencer gets mad at himself and throws a book hard at a window, startling Garcia and Matt, and curtly explains (in a tightly-controlled, powerful performance from Matthew) that it took him an hour to figure out what should have popped into his head immediately. He relays the info to them and Matt lays it all out for us. I like him as exposition guy. He’s thoughtful and measured. I like him anyway, he just slid right into our collective hearts, that one did. While I still have issues with the team being so large, the show has their reasons, so far I really like their choices, and it’s not up to me anyway. 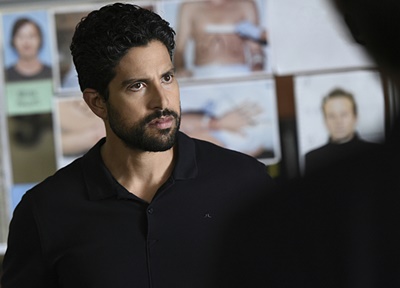 Luke is incredible, too. As pretty much the only uninjured team member that was right there when it all happened, he has a better handle than anyone on where they need to go with this. He’s gentle and more openly protective towards Reid (big way to score points with this viewer), and acknowledges his state of mind. He helps Spencer realize what it is he’s suffering from. Reid guesses PTSD, but it’s called PTSS now because it isn’t a ‘disorder’, but a syndrome caused by injury. Luke is also a strong lifeline for Monica when she crumples after seeing her deceased husband. He’s incredibly selfless and extremely helpful the entire time, and it’s impressive. Nicely done by Adam and well-written by Breen.

As noted above, Emily was taken by Scratch and dosed, and the team needs to find her quick or she’s dead too, and here I have to give props to Paget. Her scenes with Scratch were riveting. She goes from being confused about where she is, to pissed off when she sees who has her, to afraid when she sees the extent of her psychosomatic “injuries”, to devastated when Lewis gloats that Stephen is dead… and all of it’s convincing as hell and we take that ride with her on the edge of our seats. Lewis took her and only her because he’s been monitoring the team’s texts and her and Stephen had set up a fake “AH” text conversation to lure him in. The ruse worked, but now Emily has to endure both physical and psychological torture as Scratch demands to know where Hotch is.

Emily struggles because she’s in excruciating pain from the suggestion Scratch planted in her brain but she doesn’t give in and she flat out tells him he won’t break her. Scratch concocts a number of hallucinations to keep her docile (like fake instruments and medical monitors) and to wheedle the information out of her. He then makes the stupid mistake of killing her, and before bringing her back to life with the shock paddles she has a vision that lets her know this is all bullshit. So screw you, Scratch! She finally sees through his illusions and “Mike Tysons” his ear and makes her escape on her perfectly good legs. 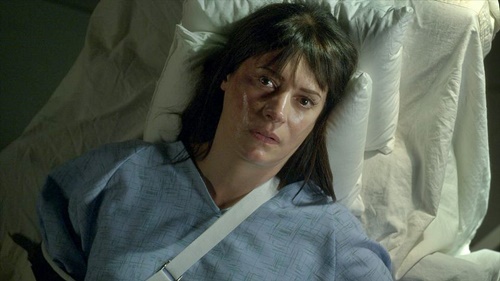 Reid, Matt, and Luke are on their way to get her, thanks to Garcia pinpointing the location and she meets up with them in the corridor and tells them Scratch is upstairs. Reid moves to go off with Matt to get him but Luke is there already. Emily makes my favorite move of the night right then. She tells Spencer, desperately, not to leave because she needs someone she knows is real right now. True or not, Emily protects him, knowing his fragile state, and his precarious position with the bureau at the moment. That’s what a true leader does, looks out for her teammate, her friend, before herself. He embraces her and her relief is palpable. After much of last season with her playing it close to the vest, it’s nice to see Paget ‘let Emily out’, so to speak, and give us a reminder of the full force of her talent.

Scratch runs off like a chicken shit and Luke corners him on the roof as he goes over on some kind of ledge that doesn’t go anywhere. It begins to break as soon as Luke walks up, looming over Scratch with a look of disgust. Scratch begs Luke to help him as he clutches the side of the building. You’re barking up the wrong agent, Peter Lewis. Alvez doesn’t play. He’s got a dark side that we get glimpses of from time to time and your murderous ass shouldn’t be looking to him for any help.  It looks like Scratch can’t hold on. Luke makes a move to holster his gun to help but Scratch either lets go or falls and busts his pumpkin head open on the ground. Or so we think.

Something about that whole sequence was off. It looked like he made some weird face as he fell, either a grimace or a sneery smile… what if it wasn’t Scratch at all on that wall? But then, they all would have had to hallucinate it was when he was laying on the ground at their feet, bleeding in the dirt. I think the one thing I didn’t love about this episode was Scratch’s manner of death, if he is actually dead. He’s been too clever, a mastermind, eluding and torturing our team for years… and he falls off a building. I mean, couldn’t he have hallucinated he could fly, or self-immolated or something?  I was hoping for a more fitting end and it was kind of anti-climactic. 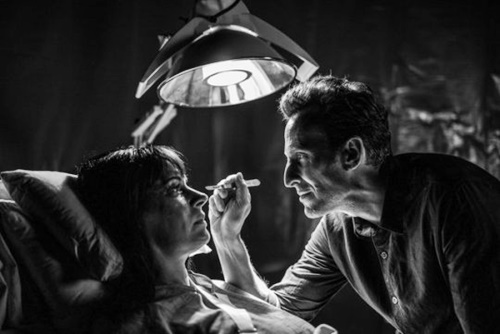 Still, this episode was all things. It was as horrific as it was heartfelt, touching and funny, and it killed Scratch and gave us closure with the character of Aaron Hotchner. I loved the “Wheels up” mantra at the end. It was a fitting tribute to Hotch while also showing the reason why they all continue to move forward, and keep doing what they do. This was an excellent start to the season, and I can’t wait to see what else they have in store for us!

17 thoughts on “REVIEW for Criminal Minds Season 13 Premiere: “Wheels Up”!”