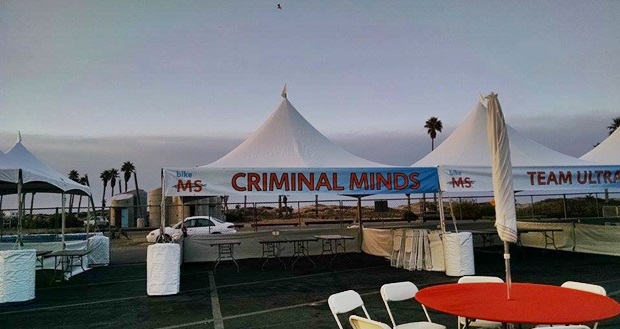 Welcome to a very special report. We don’t usually have guest contributors here at Criminal Minds Fans, but this woman’s story deserves to be read first hand! Ryka Hirokane, CM fan extraordinaire, flew on her own dime to Southern Cali to volunteer at the CM MS Coastal Challenge, the grueling, 100 mile annual bike ride benefit for Multiple Sclerosis. What follows is her own account of what occurred during that amazing day, and the bonus days immediately after. Her odyssey is any Criminal Minds fan dream come true. Thank you for sharing, Ryka – Mahalo! 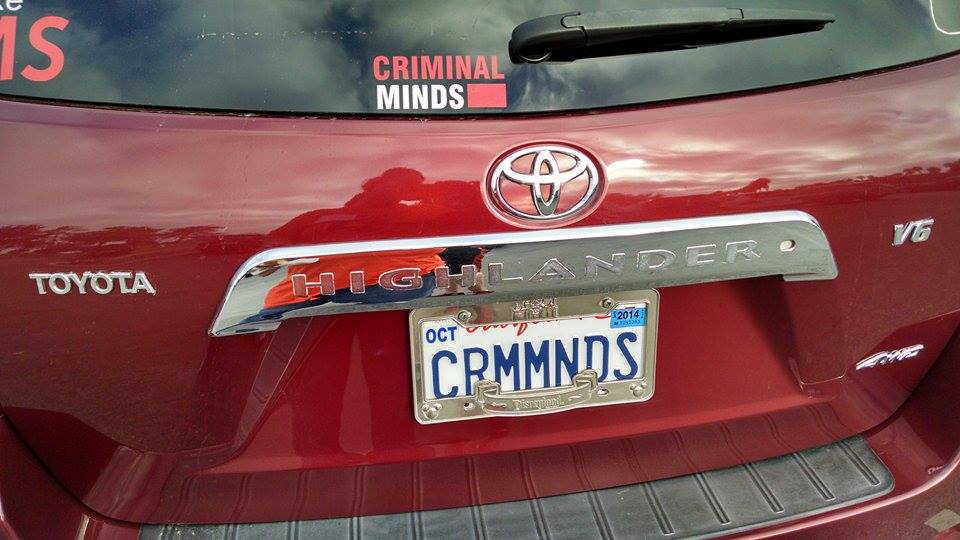 WOW!  First thing I have to say is what an incredible experience!  It has been a long, long time since I’ve volunteered, and now I don’t know why I haven’t done it more.  It was such an honor and humbling experience to be a part of such an amazing event.  I learned so much from so many people, and met some new friends.  I encourage anyone to go out and give their time to such great causes.  I promise you will not regret it.  Now, on to the story!

I got assigned to work the volunteer check-in table and, of all places, the Baby Girl tent.  As my shift on the volunteer table came to an end, I got to see the riders off on the 30 mile course.  Included in the riders were a few from the Criminal Minds Team clad in their awesome black, red, and white jerseys. As riders began to trickle in, I wanted to get some awesome action shots of the team riding to the finish line, but I wasn’t sure how long they would be, and I had to get to that Baby Girl tent!

Setting up was a bit chaotic, but once all the dust settled, I got to work the table with the Criminal Minds Season X shirts (which I proudly sold, along with a couple of their cycling jerseys).  Now, the Baby Girl tent was right next to the Criminal Minds tent (for obvious reasons), and I just so happened to look up and who do I see under their tent?  None other than Mr. Joe Mantegna. A line quickly formed for pictures with him, and I never got to talk to him really because he was swamped.  But I did get a hug and a picture with him! 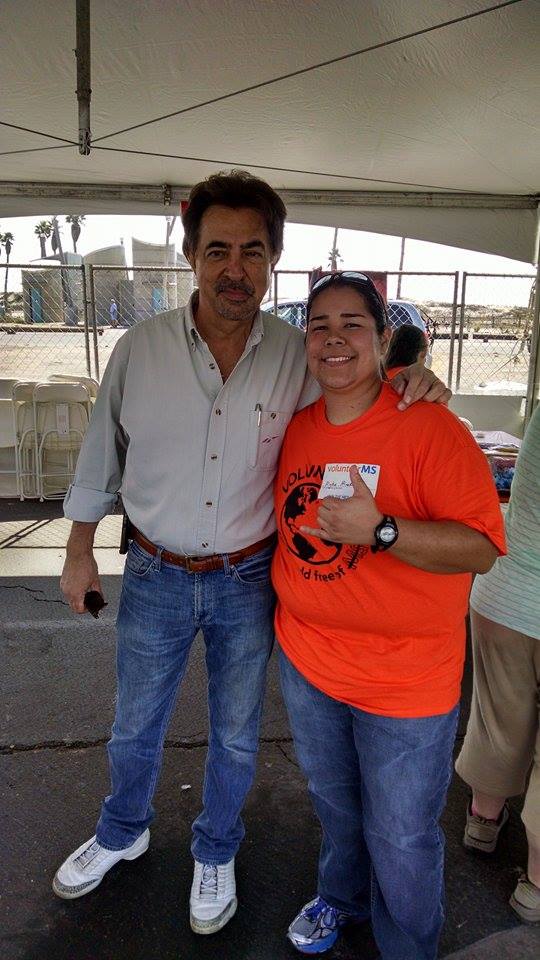 Soon after, more riders started to come in.  It was only a matter of time before our CM crew started showing up.  During this time, Shemar’s mom Marilyn came over to the booth and sat while waiting proudly for her son. I went over to her and introduced myself.  Let me tell you, Marilyn is the sweetest, kindest, person I have ever spoken to.  She is just an incredible woman and there are not enough kind words to do her soul justice. 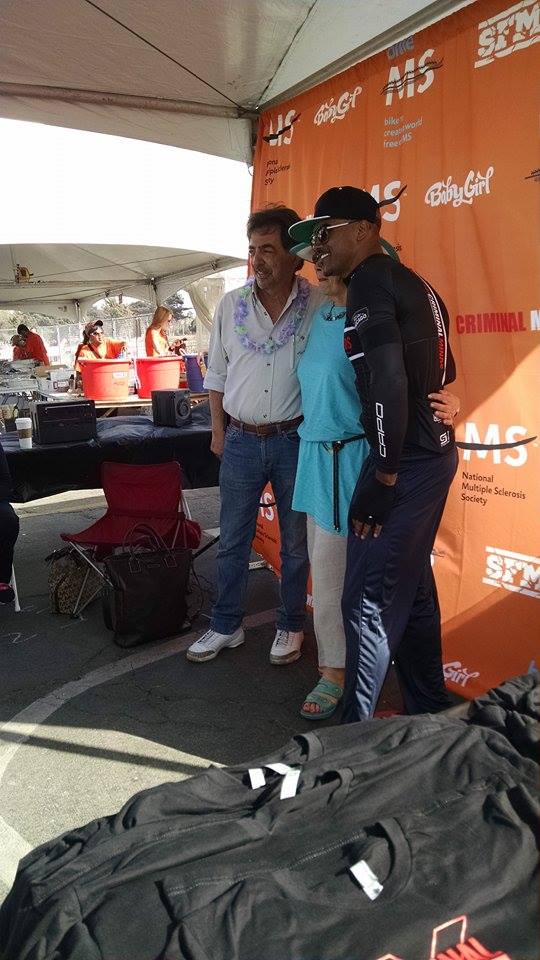 As I began to see more of Team CM flow in, I spotted Mr. John Hatchitt! I introduced myself, and to be honest I couldn’t have met a nicer guy.  We got to talking for awhile and I learned so much in that short time from him.  John is a true class act. 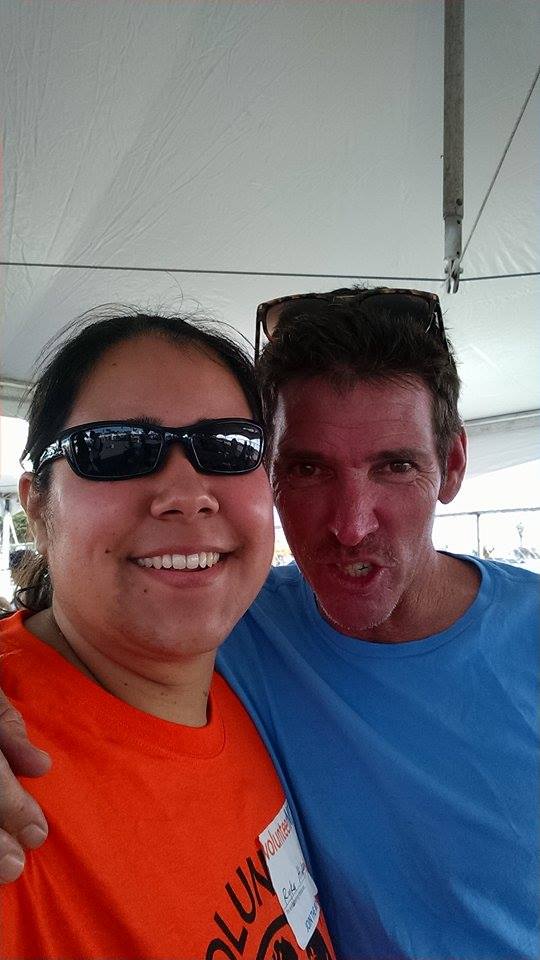 Not too long after that, the guy everyone had been waiting for showed up!  Shemar came in as I was still working the CM shirts.  All the volunteers were wearing orange shirts and I was the only volunteer at the Baby Girl tent.  One of the first things Shemar did was come up to me, shake my hand, give me a hug, and thanked me for taking the time to volunteer.  That really goes to show what a stand up guy he is and how much this incredible cause means to him.  He really puts his heart into it. 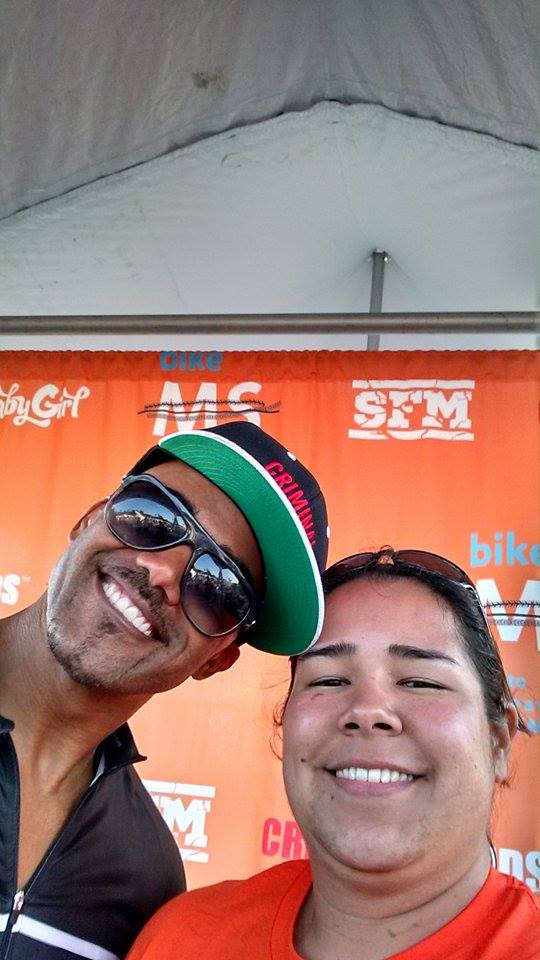 I watched Shemar greet the last person in line with the same enthusiasm as he did the very first person.  He signed autographs and took pictures for almost three hours… after biking 100 miles!  This guy truly loves his fans and the people who support him.  And the Shemar you see on TV and social media?  That is the exact same goofballin’, cheese grinnin’, guy you see on your TV and computer screens.

When all was said and done, and the sun was just about set, I got my hug and picture with Shemar.  At the end of the day, I was exhausted and beat, but it was worth every single second.

Okay, so not entirely CM related… BUT!  I always told myself that if I ever got down to L.A., then I was going to check out one of their plays.  The play is called “Banshee” and it was insane!  Go check out this group please, you will not be disappointed.  This particular play was written by Brian C. Petti, produced by Rebecca Sigl, and associate produced by Garcia herself – Kirsten Vangsness.

Yes, you read that right.  I got invited to come by the on-location shoot and I wasn’t about to miss that opportunity! The only cast member filming that day was Joe.  When I got there I had to wait because they were filming his last scene for the day.  It was such an honor to watch Joe work even for that one little scene.

When that was done, I was given the grand tour, and grand it was!  The first person I was introduced to was Greg St. Johns, Director of Photography.  This man is a genius!  It was amazing to watch this guy work.  He can spot the smallest of things to the biggest when filming a scene. Greg is such a nice guy too!

Next person I was introduced to was Pam Leonte, Script Supervisor.  This lady is a doll!  I learned that her job is to make sure lines are said right and in time.  It was awesome to watch her work.  Pam let me hang out in one of the chairs and check out all the filming on the monitors.  She reminded me of a mama bear where she took good care of you but made sure things got done! I was then introduced to stunt coordinator Tom Elliot.  Really nice guy!  I may have gotten a little giddy because the one thing that kept running through my head was JJ’s fight scene in season 7… it was great.

And then who was I introduced to?  None other than Writer/Producer Janine Sherman-Barrois.  She is just incredible!  I learned so much about the process and scripts from her.  She told me how they see an episode as they write it and how it’s always great to see what they put on paper translated to screen.  What a phenominal experience it was to sit in a chair next to Janine and learn from her.  To be able to ask questions and get them answered from someone so talented was just amazing! 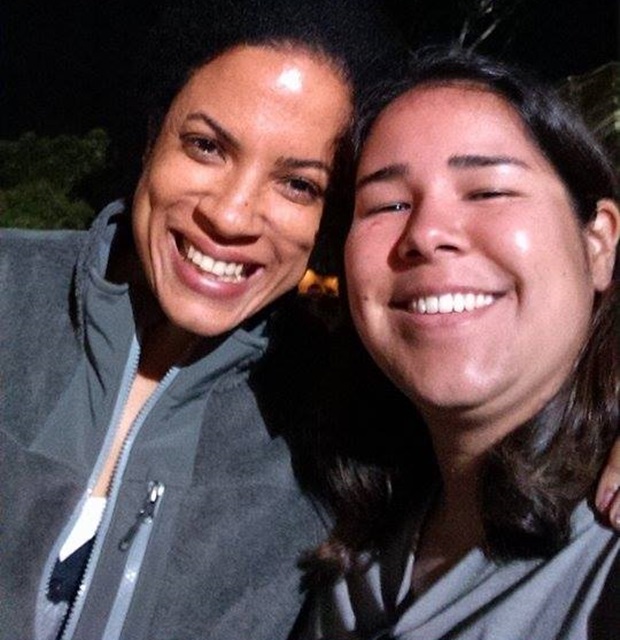 Last, and most certainly not least, I learned an incredible amount from John Hatchitt.  I just cannot say enough great things about this guy.  He gave me an overview of the works for an entire day of production.  I learned how to make night shots while it is still day, and just how important lighting really is for a shot.  John also introduced me to some of his crew guys who also were just awesome to talk to.

In total, I was there for a little under 5 hours and I myself was beat.  That whole crew was there for almost 15 hours, and they only shot 2 scenes!  It was such a humbling experience to know what goes on in the filming of an episode.  I am truly in awe of what the crew behind the scenes does to make sure that we at home get an entertaining episode of Criminal Minds.  They all bust their tails to keep the well oiled machine turning, and enjoy doing it.

There are not enough thanks in the world to show my appreciation for this incredible experience.  BIG MAHALO (Thank you) to Rachel Davey from the MS Bike Ride, Shemar Moore, Joe Mantegna, Greg St. Johns, Pam Leonte, and Tom Elliot.  Special MAHALO to Janine Sherman-Barrios for taking care of me and letting me learn from her astounding talent.  And there are not enough thanks in the world for John Hatchitt.  MAHALO John for everything you’ve done and taught me to make my trip memorable.

And to my dear friend Kosh, thank you  for all you’ve done.  Love you girl!

Also, a big MAHALO to Tari for letting me share my story with you all!  To donate to MS please go to:

Also, when in L.A., hit up http://www.theatreofnote.com/ and check out a play!  I promise you will NOT be disappointed!