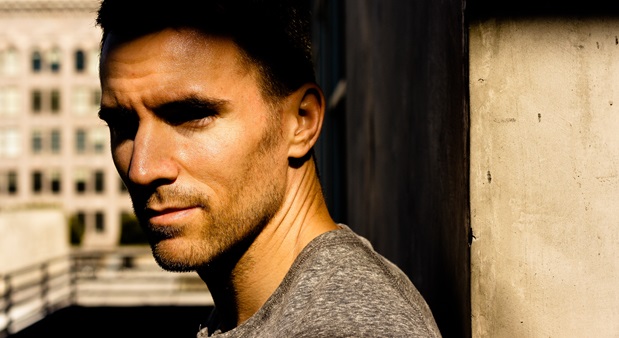 He’s the dead dastardly deceiver who was having an affair with Charlie’s wife in episode 11×02, The Witness. Meet the New York native whose been on every procedural from CSI to The Mentalist to Hawaii 5-0, and now he’s been on the best! You can also catch him on Halt and Catch Fire, and Eli Roth’s new horror series South of Hell, out this fall.

TJ: Hi Cuyle, let’s start out by finding out where you grew up. Are you a California native?

CC: No, I’m actually from upstate NY, a little town called Oneonta. I’ve been in LA for about 5 years, but I’m an East coast kid. I do miss it, try to make it back like once a year. Production season runs from July 4th weekend up until May so I don’t really go anywhere those ten months, but I try to travel in June. Going to NY is tough, sometimes. Home isn’t always what it used to be, you know how it is.

TJ: Absolutely. Can you tell us why you chose acting as a profession?

CC: Oh boy, I’m not sure I did yet (laughs). When I went to college I didn’t know what I wanted to do, I was just a jock pretty much, and didn’t pay attention to the arts. Then when I was a senior in high school, I saw a couple of my buddies in the school play, and I loved them so I think it put an idea into my head. I went to college in Oneanta – my mom worked there, so free tuition – I had no idea what I wanted to do so why not go for free in my home town while I try to figure it out?

I figured out pretty quickly as I took business and science courses that I wasn’t interested in doing that for the rest of my life. I took some theater courses, went towards a theater direction. But then I moved to NY and wanted to be a model. I found out within about two months that modeling sucked, and the acting side of things progressed.

TJ: Looking at your IMDB, I noticed you have been on several procedurals. How does Criminal Minds compare to the other crime dramas you’ve worked on?

CC: Criminal Minds is like … darker than other shows. All of them are unique in their own way, but I feel like CM feels darker. I don’t really watch any of them, I’m terrible, but I get auditions, if I’m unfamiliar with the material, part of the research is to watch the show and to get a feel for what it’s all about. I’m a huge fan of Halloween, and the dark side of things.

TJ: I’ll bet you got along well with Matthew then, if your paths crossed. He’s a huge fan of Halloween.

CC: He was a cool guy! I actually auditioned around ten times over the course of about five years, and since he directs sometimes, I auditioned for him a couple of times. We’d have some chit chat and he was always really cool. I always hoped to get on something Matthew directed.

So yeah it actually took a while to get on CM, but in terms of actually being on set, it’s not too much different from any other production I’ve been a part of. Everyone is usually pretty fantastic, cast and crew-wise. My scene on Criminal Minds was with Tim Kang from The Mentalist, so I really didn’t get to meet the main cast much, except at the read-through. They all came around and said ‘hi’, which was really nice, not everyone does that.

On my day of shooting it was just me and Tim, at this crazy little motel in the middle of nowhere. He was super awesome, just a super cool guy. That’s the thing, you never know. I’ve never had a really bad experience, but some people are just more friendly than others.

TJ: Tell us about your character, did you play him as a pure baddie or try to find something sympathetic about him?

CC: I tried to… this is funny because when I auditioned I thought he was just a prick. Right? And he is a prick, but I tried to play it like he was this guy who knew what he was doing but just didn’t care. He knew she was married. It was kind of like a power thing, so when he (Tim) showed up at the door I played it as more of an annoyance, like what is “this guy” gonna do? He was a bully.

We added a little bit more dialogue, and the fighting scene was a little more involved but they cut some of that for time constraints. John Terlesky and Sharon (Lee Watson) are both awesome, by the way. I worked with one director on another show who didn’t even say hello or acknowledge me at all, that’s the worst. But they were both really cool.

TJ: You touched on your CM audition process earlier, can you elaborate a bit?

CC: It used to be really nerve wracking. When I first got to LA, Criminal Minds was actually my very first audition! They’ve been super supportive, brought me in once or twice a year for the past five seasons. You know, when people want you to get the part that’s a big part of it. And the pressure that actors put on ourselves, and what are the people in the room thinking of us? But you get over that, and I wasn’t nervous too much for CM this time, they’ve seen me a bunch of times already and we’re on a friendly level. You show them your interpretation of the role, if they like it they hire you.

TJ: Based on what you’ve seen, do you have a favorite BAU team member?

CC: Judging by the little I know, I like them all. A politician’s answer, right? I don’t know if I could pick a favorite, definitely a fan of Matthew just because he’s always been a super guy. Yes, you can put Matthew.

TJ: Were there any funny or light moments on set?

CC: The fight scene, they hire stunt doubles, and the guy who was my stunt double was actually Paul Rudd’s stuntman from Ant Man. So we rehearsed the fight scene a couple of times, and he thought it was cool I was letting him actually do my stunts. A lot of actors don’t want him to do their stunts. I’m thinking “Really? Isn’t that why you’re here?” Bruce Willis once said “I don’t bounce like I used to.” And so yeah, if I can save any wear and tear on the ol’ body, I will.

TJ: What role are you most proud of in your career so far?

CC: So many things that I’m happy to be a part of. One of my favorite jobs has been Hawaii 5-0. I got to go to Hawaii! Worked 4 days out of two weeks, it was a free vacation – plus it’s a great show and I really liked the role. I have had great experiences on all my roles in TV. There were some student and independent films I made out of love. Looking back, there are certain projects that at the time it feels like a waste, but then you look back on it and it’s a labor of love.

Out here, it’s show business, not show art, and the business side of things sucks. The biggest part of anyone’s career is managing the business side of it. It’s a different feeling… not that the people necessarily are different, but there’s just not the ‘community’ feel, especially with a part like mine which was just a day or two. So indie stuff and student films I used to do, still hold a place in my heart. It’s where I made mistakes, learned my skill set, and met a lot of great people.

TJ: Who is your dream co-star?

CC: Oh boy, there’s a lot of them! Always admired Kyle Chandler – love that guy! Would love to work with him. Everyone wants to work with the big celebrities. I think Tom Cruise is fantastic, just as an actor, he’s very charismatic. Ellen Degeneres, I’m a big fan of hers, she’s such a positive spirit and I’d love to just meet her one day. Big fan of the show Halt and Catch Fire which I was on, which stars Lee Pace and I’d love to work with him. There’s Vigo Mortensen, and Andrew Lincoln from The Walking Dead. Anyone from Game of Thrones or Lord of the Rings, just plug and play anyone, and that’s who I’d like to work with. I’m a fanboy.

TJ: What’s up next for Cuyle?

CC: I shot a show back in January called South of Hell, which is Eli Roth’s show. I’m in episodes 7 and 8 and I thought it was supposed to come out this fall, that’s the next thing. I’ve had a couple of very solid auditions lately, so we’ll see what happens!