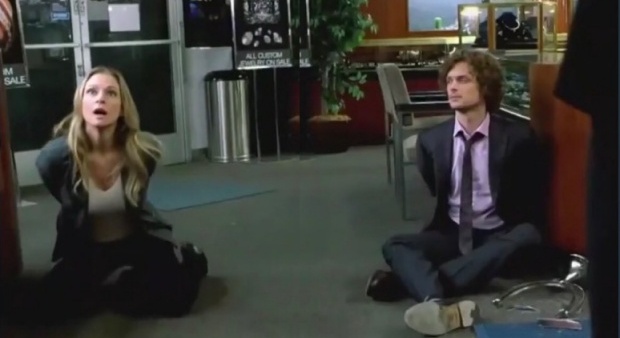 I thought you dear readers might like a bit of a refresher before we head into what looks to be a helluva final season for our show, so I’ve asked @r31dfan on twitter to bless us with one of her concise but thorough recaps! She graciously agreed, so feast your eyes below, in preparation for **drumroll** January 8, 9/8c on CBS!

Season 14 begins with the series’ 300th episode, really a do-not-miss installment! Last season ended with a showdown happening at the FBI parking garage: Garcia is being held in the backseat of a car and Reid is facing off with our apparent UnSub, Agent Mary Meadows.

300 begins with a brief recap of ‘Believer’ and a retro look at the introductions of each of the present BAU members, and then we pick up the team returning to the BAU to find chaos as a pulled fire alarm has triggered a mass evacuation of the building.

In the cult’s warehouse, Reid orchestrates a diversion allowing Garcia to escape and she eventually makes her way back to the BAU to let the others know what has happened. The race is on to find Reid before the cult kills him. They determine that Reid is intended to be the cult leader’s 300th victim, a sacrifice to ensure their continued safety.

Prentiss and Rossi make the connection to the Liberty Ranch group from the season 4 episode ‘Minimal Loss’. Between the clues Reid dropped – one cryptic comment to Garcia and another signed in sign language picked up by Alvez – they eventually surmise the Believers are setting up a new camp somewhere within a few hours drive and Garcia’s computer research, coupled with the team’s diligent work brings them to realize the cult’s new location.

The team arrives just as Reid is about to be sacrificed and a shootout ensues, killing the cult leader and resulting in the arrests of Meadows, et al, and the safe retrieval of their kidnapped agent.

There’s callbacks to past episodes, connections made and backstory for several of the characters in the episodes following the season premiere:

14.04 ‘Innocence’ has Garcia revisiting PTSD from the ‘300’ kidnapping and the estrangement of her (step?) brother which is resolved in this episode.

14.05 ‘The Tall Man’ is a creepy, well done story about a legend back in JJ’s home turf and gives us some major backstory on her, telling the story of her sister’s death and connecting the current events with Roslyn’s death and the legendary tall man.

14.06 ‘Luke’ we get a whole lot of backstory on Alvez, and a return visit from season 13’s ‘Dust and Bones’ guest character ‘Phil’, Luke’s friend from their Iraq days.

14.07 ‘Twenty-Seven’ introduces us to Prentiss’ possible new significant other, also in law enforcement, Andrew Mendoza who reappears later in another episode.

14.09 ‘Broken Wing,’ Tara Lewis is revealed to have been previously married when her ex-husband contacts her for a case, and we learn why their marriage broke down.

14.10 ‘Flesh and Blood’ tangentially revisits the season three episode ‘In Name and Blood’ where the UnSub turns out to be someone they already know from the past case.

14.15 ‘Truth or Dare’ We see Rossi’s recent rekindling of his romance with his third ex-wife Krystall that culminates in their remarriage. The episode’s case encompasses a life or death situation where JJ is facing execution and confesses to Reid that she’s “always loved him”, a revelation that’s yet to be resolved.

Even the episodes that I haven’t touched on actually have interesting cases or good character moments in them, there’s not a bum episode in the group this season.

Next Wednesday just cannot come soon enough for me.